There’s always a lot going on at Royal Neighbors. Take a look at our news and events. Feel free to share. 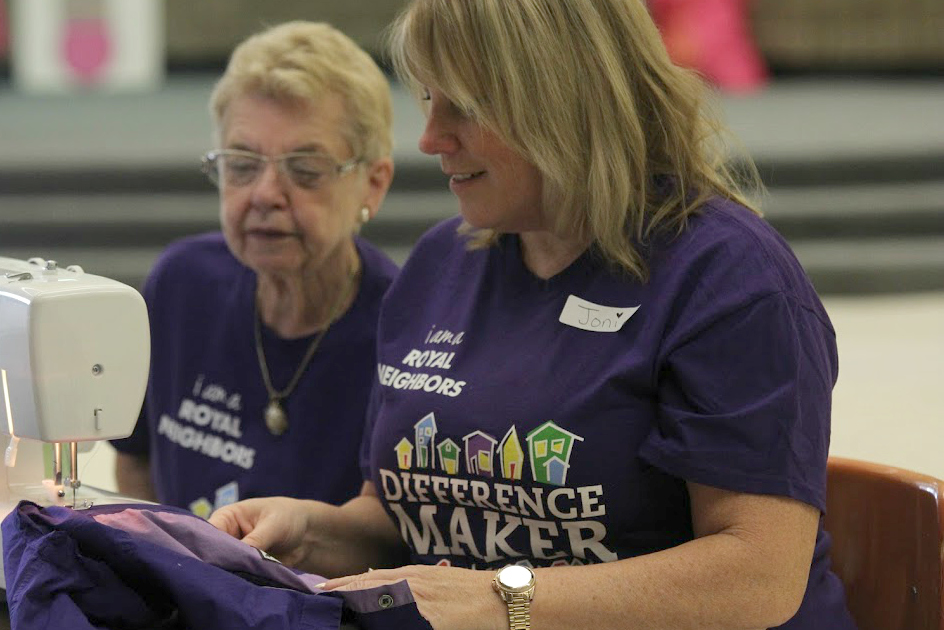 Pat Floming, at left, and Joni Caldwell, at right, are hard at work creating sundresses for orphaned and underprivileged girls.

(Rock Island, IL) – Orphaned and underprivileged girls received hand-made sundresses and their new attire was modeled at a special fashion show thanks to the efforts of the Difference Maker Stitching A Legacy team from Viola, IL.

The volunteers from Stitching A Legacy created 50 dresses in one afternoon that were donated to girls in domestic violence shelters, half-way homes, refugee safe places, and hospitals, as well as an orphanage in the Philippines called The Legacy Home Orphanage.

Now Stitching A Legacy can do even more.

“Stitching A Legacy’s Difference Maker sew-a-thon and fashion show were a complete success,” said McKara Caldwell who spearheaded the project. “The volunteers had a blast serving their community in a fun way, and everyone was proud of their efforts.”

The Difference Maker Fund Program is a member benefit* launched by Royal Neighbors in 2016, giving its members an opportunity to receive $200 in seed money to organize and complete community service projects that align with Royal Neighbors’ vision to protect women financially and empower them to improve their lives, families, and communities. The funds are distributed to Royal Neighbors members who, with their friends and family, carry out their Difference Maker projects. More details are available at http://www.royalneighbors.org/more-than-insurance/difference-maker-fund.

About Royal Neighbors
Royal Neighbors of America, one of the nation’s largest women-led life insurers, empowers women to meet the needs of their families with annuities and life insurance products such as whole life, term, simplified issue, and universal life. Royal Neighbors was founded in 1895 and is headquartered in Rock Island, IL, with a branch office in Mesa, AZ. For more information, visit www.royalneighbors.org  or call (800) 627-4762.